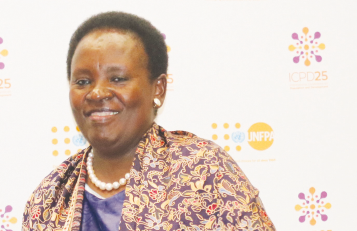 The Government of Lesotho has been applauded for taking steps to revitalize HIV prevention and committing to the HIV Prevention 2020 Road Map.

Speaking during the HIV National Prevention Coordination Forum held at Victoria Hotel recently, UNFPA, the United Nations Population Fund Officer in Charge Esperance Fundira said it was commendable that in 2014, Lesotho made a deliberate effort to revitalize HIV prevention through efforts led by the HIV Prevention Technical Working Group, who developed a Call for Action and Declaration of Commitment on 30 July 2014, saying this led to intensified effort to revitalize HIV prevention and have it back on the radar.

“On another level, in June 2016 during the UN Assembly meeting, Lesotho made a political commitment ‘On the Fast Track of Accelerating the Fight against HIV and to ending the AIDS epidemic by 2030’,” she added.
She further stated that the Government of Lesotho further launched the National HIV Prevention 2020 Roadmap in 2017. The Prevention Coordination Forum, she added, was then conceptualized as thus for operationalization of some of these important commitments.

She said the HIV prevention forum was very pertinent as it was going to provide an update on progress regarding the HIV Prevention Road Map and identify critical gaps in implementation.

UNFPA Officer in Charge however expressed concern on the high HIV prevalence of 25.6 percent and the low comprehensive knowledge on HIV prevention, saying It is therefore very important that a robust and coordinated mechanism is put in place in ending HIV transmission.
“Also of great concern is high HIV prevalence among adolescents and young people with the key drivers being female sex workers and men who have sex with other men as well as the transgender, she added”

She therefore urged the Government of Lesotho and all partners to put emphasis on high impact interventions as per the HIV Prevention 2020 Road Map from the national, district and community levels in the areas to reduce transmission of new infections such as combination Prevention Packages for Key Populations, Combination Prevention Packages for Adolescent Girls and young People, Voluntary Medical Male Circumcision, Comprehensive Condom Programming and PrEP (Pre Exposure Prophylaxis).

Meanwhile, Masechaba Mahlapa from NAC said her institution was responsible for the development and coordination of strategies and programmes for controlling and combating HIV/AIDS in the country. She said Lesotho had one of the highest HIV/AIDS infection incidences hence the need to increase efforts in prevention of HIV and new infections.
The need for an HIV free generation was also emphasised by many who participated during the forum.