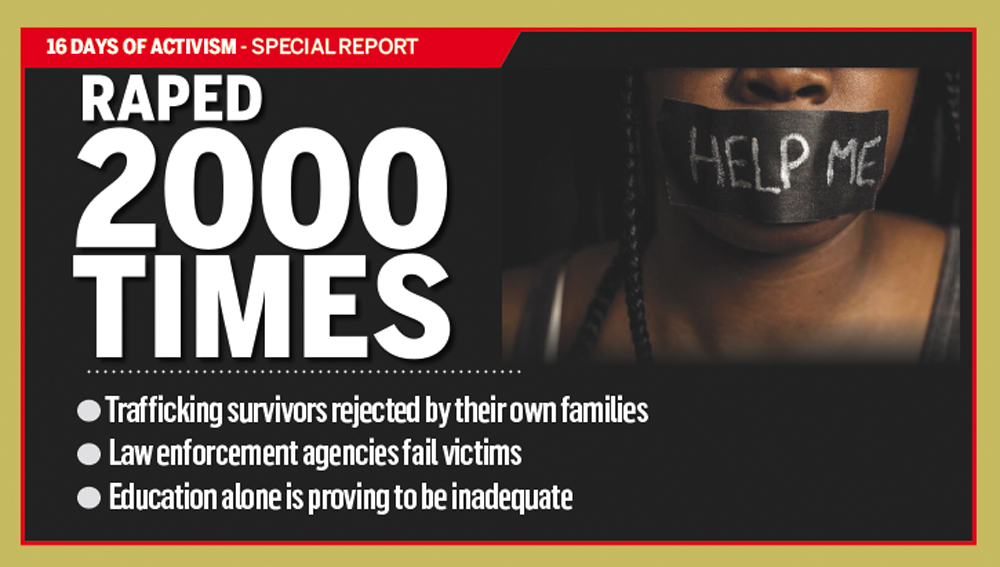 Trafficking victims have made an impassioned plea to the Lesotho government and society in general to step up measures to protect women, after it emerged that some were raped multiple times during their ordeal as sex slaves in neighbouring South Africa.

A sex slave is defined as a person who is forced to perform sexual acts and who is not free to leave the place where they are being kept or to stop the work that they are being forced to do.

As if this is not traumatic enough, escaped human trafficking victims often struggle to reintegrate into society as their own families and communities reject them upon their return from the clutches of ruthless and unscrupulous prostitution rings and drug lords.

According to some, their harrowing experience as sex slaves saw them having non-consensual sex with an average six men a day during their 12 months of captivity, which translates to being raped more than 2100 times.

In spite of their violation, these hapless women rarely receive any justice as their tormentors are hardly ever arrested, prosecuted or convicted.

This emerged in an interview with Ministry of Home Affairs’ Refugee and Migration Liaison Officer, Nthatisi Thabane, who described the scale of women trafficking to South Africa and with Lesotho as ‘of unprecedented proportions’.

Thabane related a story of a 17-year old Lineo of Mapoteng in Berea, who left with her friend Moliehi* to stay with latter’s boyfriend in Bloemfontein but ended up as a sex slave after a woman there had promised them domestic worker jobs.

“They found themselves locked in a house in an unfamiliar neighbourhood (which later turned out to the central business district), where their suspected Nigerian ‘owners’ made them sleep with different men.

“After some time Lineo fell pregnant and was also infected with HIV, which meant she was no longer good for business and was dying. She managed to escape with the help of one of their handlers after her friend had bribed him with sex.

“She eventually found her way to Ficksburg where she opened a human trafficking case with the local police. But upon her arrival back home she was banished by both her family and community. She was pregnant and HIV-positive but her family judged and disowned her notwithstanding her unfortunate circumstances,” Thabane said.

According to Thabane, disowning the girl proved to be a cruel move; Lineo’s baby died shortly after birth, and she now wanted to go back to her old life where no one would judge her, basically because she was feeling isolated and lonely.

In the midst of this emptiness, Lineo met a woman who offered her a job in Botha Bothe. As fate would have it, the ministry of home affairs found her a home at a safe house for abused females and human trafficking victims in Maseru; she has since healed psychologically and has even gone back to school.

As for Moliehi, she is still trapped in the sex trade in Bloemfontein. Finding and rescuing her is a challenge as Lineo is not familiar with the place and cannot help police locate her.

Another woman who escaped the hold of a prostitution ring only to be rejected by her husband is ‘Malimpho* of Maputsoe in Leribe. Like Lineo, she too was lured to Durban with a promise of a better paying job by a woman she met at the Maputsoe boarder taxi rank.

She finally found herself working as a sex slave until she was helped to escape one year later by a client who spoke Sesotho.

“On her arrival back home, she was pregnant and after the baby was born her husband divorced her. After the rejection, she could not take it any longer and attempted to apply for a new passport so she could go back to South Africa where she had been promised another job. Somehow she believed this other job was legit. In the meantime, her trafficker is still out there, probably trapping more unsuspecting victims.

“Human trafficking is very dangerous because while staying in that locked room for such a long time, the ladies die inside and become dispassionate. When society rejects them, the only course open to them is to go back to the world of prostitution which does no judge them,” Thabane indicated.

Since it is apparent that the law enforcement system is for some reason failing to identify and bring traffickers to book, creation of awareness remains the only weapon available to tackle the human trafficking scourge.

To this effect, Thamae said the ministry of home affairs and other stakeholders in the issues of human trafficking are going all out to educate people and make them aware that human trafficking is real, so that everyone can be able to identify it.

“Human trafficking nowadays happens at every corner and it all starts with dreams of a better life. Social media and lack of job opportunities also stoke the fire of human trafficking.  Society is vital in victims’ healing process; when victims feel welcome, they can relate their stories, thereby helping friends and family members not to fall into the same trap.

“Then there is the issue of victims not wanting to report their cases or open cases against known traffickers. This could be because human trafficking cases are complex and very difficult to crack.”

“Human trafficking laws differ from country to country and since it happens across borders, it is sometimes difficult to find common ground in the pursuit for Justice.

“However, since most of our cases happen in South Africa where our laws are more or less similar, the only difficulty we meet with cases between SA and Lesotho is that SA is very large and a victim can’t locate the place they were held in. It is like find a pin in a hay stack,” Moerane said.

The other problem, he added, is that the impact of human trafficking is more psychological than physical, and victims find it humiliating to narrate their stories. Others believe it is their fault that they were trafficked.

To fill this gap, the police collaborate with non-governmental organisations to create awareness on human trafficking and the importance of reporting such cases. This he said they do through public gatherings, media platforms and at social events.

He added that they have recently trained 33 police officers, with the help of international funding, who will in turn train their colleagues on how best they can identify signs of human trafficking in every field of work.

One such NGO is Beautiful Dream Society (BDS), which is based in Maseru and provides crisis care shelter for victims of human trafficking. Vulnerable women are referred by law enforcement, community, and healthcare agencies.

The center gives victim the chance to heal from their trauma and to be assisted with a transition plan to resume a healthy, fulfilling life beyond their time in the BDS Hope House.