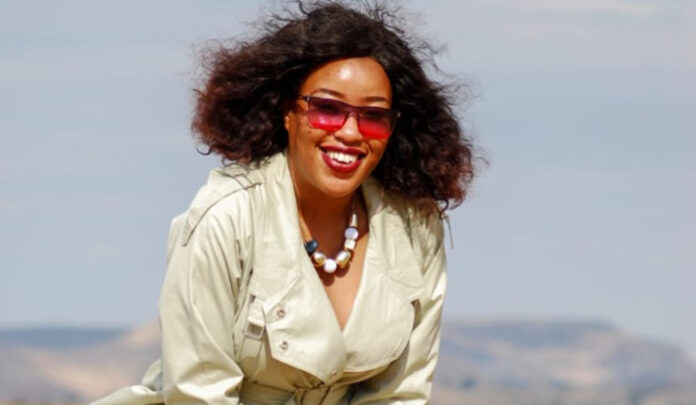 Another hair product has hit the market with an invention from up and coming businesswoman and innovator, Monica Dongwane, who has produced an organic product known as Mo Care Hair Food.

Mo Care Hair Food is an organic product with no chemicals added to it. It is with the help of a secret ingredient, a ‘weed’ that stimulates hair growth. It can be used by anyone, from a one-year old baby to an old person.

It also helps bald people, but not those whose baldness is hereditary.

The 27-year old Ha Abia resident narrated the journey saying that it all started as a home remedy in 2018 when she did it for herself and it worked while she was still in a higher learning institution.

She said her innovation has since attracted a lot of attention from some people who saw her hair.

She then bought some containers and began selling the product to the willing clients.

Dongwane told theReporter that she came back home to Lesotho and decided to indulge in the making of the hair food in May 2019. She has now made stickers to label the product that is now hitting the market for customers who want to keep their hair beautiful.

The labour law student said the biggest achievement was getting the product a barcode and having people’s testimonials about the product.

However, Dongwane said the hair food is made from the comfort of her home.

“I get pure hair food then extract its natural product. I then extract oil from the weed and add Vitamin E which helps in protecting the skin especially in children, then mix with other natural oils like olive oil and coconut oil.

“I melt them when ready, I bottle and let it cool,” she told the weekly.

The raw materials she uses are sourced locally. The stickers and the packaging are also done in Lesotho.

She said that competition in that scope of “work is high because people in Lesotho do not really believe in locally produced products.” But customers do demand her products after having experienced the damage caused to their hair by other hair food products.

“Mo-Care does not have any negative effects on the hair,” Dongwane asserted.

Trafficking survivor back in Lesotho

TheReporter - January 18, 2022 0
By Poloko Mokhele The construction of permanent housing, visitors’ lodge and associated infrastructure worth M454-million at the Polihali Village will start this month. According to the...

TheReporter - January 18, 2022 0
By Seleoe Nonyane Standard Lesotho bank has agreed to extend applications for the bursary fund cutoff date to January 21,2022. This after, the bank received...

TheReporter - January 18, 2022 0
By Motṧelisi Sekonyela The hearing for an application in which some civil groupings are seeking to block the government-imposed mandatory COVID-19 vaccination was on Tuesday...