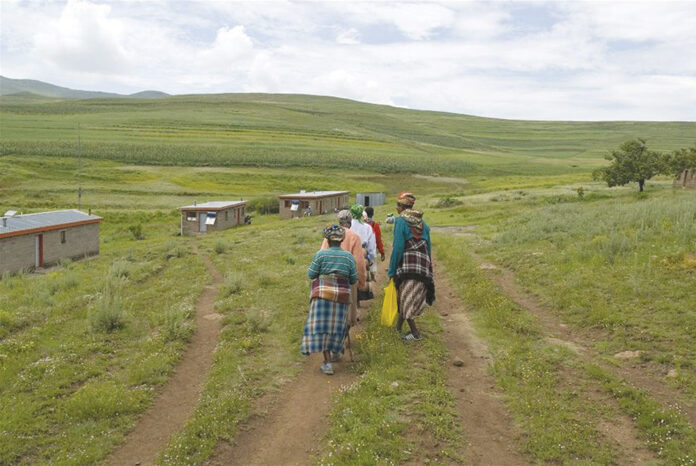 Lesotho’s Land Act of 2010 has been hailed as one of the greatest milestones the country has ever attained in its bit to save women and restore their dignity, while at the same time giving them a chance to fight for their right to land.

The International Federation of Women Lawyers (FIDA), as one of the organisations working tirelessly to help women know about their land rights, while at the same time fighting for women to get their land back, has with other organisations and other women rights lawyers realised that in as much as the Land Act is good, there are still sections that do not work in favour of women and sometimes leave them vulnerable to losing their land.

“We realised as women’s rights activists that even though we do have this Land Act, there are still many cases day in and day out that bring about disinheritance. We have this clause which is not clear that when the land is passed onto another person, a certain number of family members may meet and decide on which person will be given entitlement to the land.

“That clause seems to be disinheriting women, especially widows, because of our cultural norms; in a meeting set up to discuss inheritance issues, women are not given the chance to talk for themselves as it is taken for granted that they are already represented and they do not have a say.

“Obviously, being represented means the interests of that woman are not taken into consideration, that is why there is still so much disinheritance. The patriarchal system puts a premium on loyalty more than anything, such that even old women who do take part in such meetings are so subservient to men that they end up losing land rights,” she explained.

Lehloenya said, as women rights activists, they have realised that the Act is good in writing but it does not help women in promoting or protecting their rights.

She continues to show that clause (b)(a) which talks about ‘family’, also seems to be causing more problems than good, because it is not clear on the number of family members expected to sit in that meeting and who should be part of the family.

She, however, says with the support of Freedom House Organisation and Arisa Foundation, Fida will embark on advocacy campaign on issues of customary land rights, which will see them engaging in an information dissemination programme for two years, which will educate women on their land rights.

One woman who was disinherited her land after her husband died ‘Mamoleboheng Mahase*. Mahase who lives in Mafeteng, south of Maseru, has two children aged five and eight.

“My husband and I were married in a civil marriage for nine years and along the journey we had differences that led to us separating. However, after a few months, we reunited.

“Since I was the one who have moved out of the marital home, when we reunited the family members no longer recognised our marriage. They accused me of abandoning my marriage and not hanging on resolve whatever differences we had.

“Then the worst happened after a few months of reuniting; my husband had a car accident and died on the spot. That was the beginning of my problems. My husband’s family called me names, they blamed me for his death,” ‘Mamoleboheng says with teary eyes.

She was even denied the chance to properly mourn her husband; she went to the funeral just like any other mourner.

After the funeral, the family convened a meeting without the wife and chose one of the family members to inherit the farming plot ‘Mamoleboheng and her husband were given by the family after their union. They even grabbed the residential plot the couple had bought in town.

“I can’t even claim funds from my husband’s policies even though I am the sole beneficiary. I need a death certificate to do that but they won’t let me touch it. I then decided to ask FIDA to help me fight for my land rights and the case is still pending in court,” she said.

Part II of Land Act of 2010, under the “Presumption of joint titles in marriages” indicates that people married in community of property, either by civil or customary law, shall jointly hold the title to immovable property.

Even though part II of the Land Act of 2010 clearly stipulates that it shall prevail where the customary law is inconsistent with this latest legal instrument, customary practices make it really hard for many disadvantaged women with little or no access to information on land issues. The contradictions between the Land Act and the Lerotholi Laws are some of the obstacles, as the former does not repeal customary laws which still consider a woman as a minor who remains under the guardianship of her parents, particular the father, before marriage.

According to the Lesotho Land Authority, land ownership can only be passed to the next person after family members, men, appoint an heir to that land. It is an open secret that justice is not accessible to the poor and for those that successfully launch litigations, most lose such cases because of testimonies given by the families and village gate keepers such as chiefs.

Vendors, council at each other’s throats

Clients given an opportunity to regularise tax issues

Wine fest back with a bang

Pension Fund breaks for a week to fumigate

By Kefiloe Kajane Quthing has been identified as a leading district when it comes to teenage pregnancies blamed on...

By Kefiloe KajaneFears of a second wave of deadly COVID-19 infections, have led to the postponement of this year's edition of the...

By ‘Majirata Latela While the economy of the country has sunken to its knees due to corruption, more and...

By Kefiloe KajaneStandard Lesotho Bank yesterday announced the passing of Chief Executive Kenrick Cockerill who died after a short illness.In a statement,...

By Teboho SerutlaLesotho Chamber of Commerce and Industry (LCCI) together with the Solidarity fund and Botho University have today handed over a...