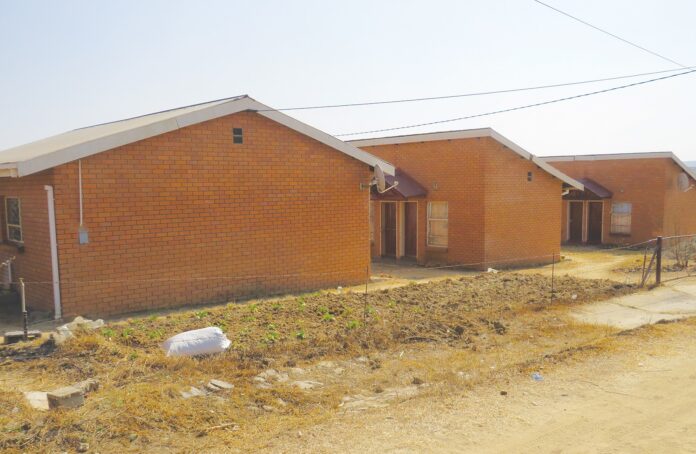 The resettled communities in Ha Tsolo and Lesia in Maseru district are claiming to be living in subhuman housing conditions that are putting their lives at risk.

Now, they are flexing their muscles to throw a word of blame to the Lesotho Highlands Development Authority (LHDA) for placing them in what they call inhabitable houses.

Their cry of despair surfaced at this week’s Monday’s public gathering held in Thetsane where they laid bare a thread of complaints regarding their “poor living standards” since they were relocated to the foreign land.

These residents who hail from Ha Mohale are bitterly complaining that the promised compensatory money from the LHDA is not forthcoming. Again, they claim that some of the houses built for them by the LHDA have their roofs leaking.

Some of these residents relocated to new settlements when the multi-billion Lesotho Highlands Water Project (LHWP) was implemented to transfer highlands water to the South African Province of Gauteng through a network of tunnels. They were from Mohale. And others were relocated during the building of the bypass road.

Addressing the public gathering organised by the communities, residents’ representative who originally lived in Ha Mohale Mothibeli Manasi, complained of shoddy workmanship on the housing structures. Their biggest concern was cracking houses and leaking roofs.

He lamented that they are not connected to the sewage pipes making it hygienically risky on their health. He strongly wished they could return to their previous dwelling as they are living in poverty in their new homes.

He openly disclosed that they receive an average of M23 000 as annual compensation for their displacement.

He said some of them had they pockets empty as they had not received compensation from the LHDA which had promised to review the compensation amount to beat the dire economic conditions as time went on.

No reasons have been advanced yet for failure by the authority to do so.

“Prices in food and other essentials are increasing but our compensation is not reviewed making and that angers us,” he said.

A resident who had been moved from her site to allow for construction of the bypass road ‘Mantṧila Seleke, said they were relocated in 1997, but until now only half of the promises are fulfilled.

“We were just relocated here and then abandoned,” she cried out.

“It all began when they (LHDA) did not give us a chance to choose our places of resettlement. The houses built for us are in poor state as the roofs leaks. Our septic tanks are too small that we have to empty them twice in a month,” she observed with disgust.

“There is moist in our houses and we fear that if we continue to live in there we will be sick. It is sadly hurting that we live in these housing establishments that LHDA claim to be of quality standards,” Seleke enthused.

The Survivors of Lesotho Dams (SOLD) national coordinator, Lenka Thamae said there are two different categories in Ha Thetsane. He said some of the residents were affected by the road construction while others had been relocated from Ha Mohale to allow for construction of the road and the dam in that area.

The minister of water, Nkaku Kabi also added weight to the communities’ demands, accusing the water authority of moving at a snail’s pace to pay out the compensation to the affected communities. He told a public gathering that South Africa, which pays out royalties to the government, “does not owe Lesotho any compensatory money.”

“Let us give the authority a chance for this month and see if they will come forward and address the situation and fix matters where they can. I am going to come back here with them before the end of this month,” Kabi said.

According to the 1986 treaty between Lesotho and South Africa, the affected natural resources from environment to the fields and the way of life of the victims are to be compensated.

Last month when addressing the compensation related issues at Ha Koporale and Ha Tšiu in the Thaba-Tseka district, LHDA’s public relations manager, Masilo Phakoe said that the process of verifying validity of the claims could sometimes take a long time due to lack of records, conflicting information or disputes among to-be beneficiaries. But as proof becomes available the authority does dishes out money.

“The delays could be due to either lack of proof of damage or loss or disputed ownership of the property. In many cases where households complain that they have not been compensated, the burden of proof lies with the LHDA to prove that indeed the benefit has duly been paid out. But due to shortcomings on the way records were kept in the past, the process of verifying those claims going many years in the past can take a long time to verify,” he said.