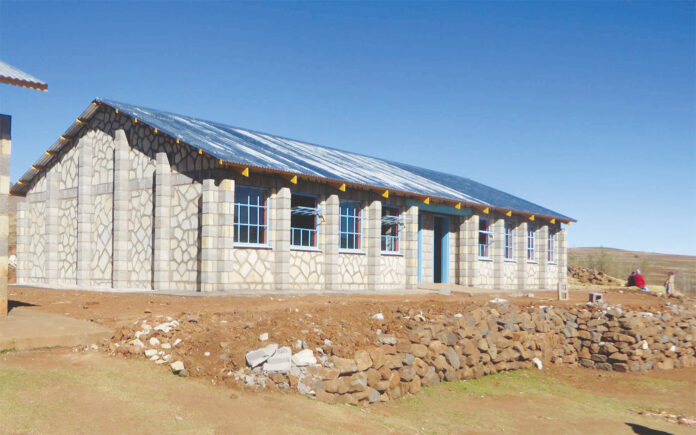 Lesotho’s free primary education policy has come under the spotlight amid mounting evidence that many under-privileged learners are forced to drop out after completing Grade Seven.

The free primary education policy was introduced in the year 2,000 to offer education for all children. It was also meant to increase literacy among Lesotho’s young population.

While it may have been an easy ride for most learners in Quthing to go through primary school due to the introduction of the policy, many learners find it hard to proceed to secondary schools due to disturbing lack of funding to cater for their school needs such as tuition fees, books and uniform.

These children’s only option is to drop out of school and in worst case scenarios, they go through the most heart-breaking experiences of being expelled from school for failure to pay school fees.

This is due to extreme poverty to which the children are subjected to in their households.

Some are left with no choice but to look for work and become breadwinners at the age of 15 on average.

Most of these children have been abandoned by their parents and are now under the guardianship of their grandparents. The latter are forced to spend their meagre pension money to fund the education of the youngsters. But the money is not sufficient to cater for both school fees and household necessities.

Old pensioners receive M750 monthly stipends from government and the money can barely cover the needs of the family for the whole month, let alone pay for school fees.

This is because high school fees range from M550 to M750 per quarter. This excludes uniform and other school necessities.

Fifteen-year old ‘Mampoi Mosiuoa, a student at ‘Maseribane High School in Quthing, last saw her parents when she was a toddler.

Mosiuoa says she has been told that her parents migrated to South Africa many years ago for in search of greener pastures.

They never came back and they are not sending money to Mosiuoa’s grandmother either.

“My grandmother, whom I am currently staying with, told me that my mother and father left to search for work when I was still a baby. None of them came back or even make a phone call”.

Seeing other children running into the arms of their parents hurt her deeply and triggers anger in her.

“If my parents were here, I would have wanted them to also give me the love that every child deserves. Now for us to have food on the table, my grandmother has to find piece jobs. We are struggling to make ends meet. We sometimes go days without food in the house and for that we rely on meals we get from school or ask for hand-outs from neighbours,” Mosiuoa told the paper in a trembling voice.

She said her continued learning was nearly disrupted when her grandmother delayed to pay for her school fees this year.

Mosiuoa added that her biggest dream is to be educated, get a good job and take care of her grandmother.

“Some of the children that I go to school with do not have any troubles getting their school fees paid but for me it was a different story. I was always among students who owe school fees,” Mosiuoa said.

She said her worries over tuition fees became a thing of the past when a renowned businessman Bothata Mahlala, stepped in and paid her school fees.

Mahlala hails from Mount Moorosi in the Quthing district, south east of Maseru City. He has initially lived in poverty.

The benefactor has vowed to assist underprivileged children with school fees, uniform, clothes and food. He believes getting children back to the classroom helps them get closer to realising their dreams.

Their dream is to change their families’ current poverty line.

Poverty is described by some economists as not having enough money to meet basic needs including food, clothing and shelter.

Tšoanelo Motaung, 15, has also been abandoned by her mother who also migrated to the neighbouring country to look for a job. Her father died some years ago.

Now, after 10 years of her mother’s disappearance, she cannot remember her face.

Motaung lives with a grandmother, who is also taking care of two of her cousins. Her cousins’ parents have also absconded.

Ever since she enrolled into secondary school, she was expelled for failing to pay school fees. He has lost the number of times he has been kicked out of class.

“Having to go through some days without food is something we are used to since we left primary school,” Grade 9 ‘Maseribane High School student said.

Under the free primary education policy, learners are to receive at least one meal in a day.

“My jobless grandmother relies on community members for hand-outs or sometimes borrows money to buy food. Some people even take her to the police for failure to pay her debts.

“I am currently not going to school because I owe last year’s and three more quarters of the current year fee. I have not been able to pay for tuition since I enrolled in secondary studies. In June this year I was told by the school’s principal never to set my foot at the premises unless I pay the entire balance,” Motaung said.

Mosiuoa and Motaung’s stories are just a tip of an ice-burg as many free primary education beneficiaries are unable to get past Grade 7 due to financial difficulties.

“I have come here because I have heard that Ntate Mahlala can help pay for my fees. I want to finish school and go to university, get a job and be able to help my grandmother.

“During times when there is no food in the house, I wish I could see my mother and ask her why she is not taking care of us although she brought us in this world, I have a lot of questions to ask her if she was here,” she cried in ordeal.

In an interview with theReporter, Mahlala said as a young boy, he vowed to make a difference in other people’s lives.

“I wanted to end poverty in my community the best way I could. I had a difficult childhood life due to poverty after my parents separated. My primary level was not that difficult because fees were cheaper. The challenge began when I enrolled into secondary as fees increased.

“I struggled to pay such tuition fees, buy books and uniform. Every time I got expelled, I would say to myself, one day when God has favoured me, I want to pay school fees for poor school children so that they would never undergo the pain that I experienced,” Mahlala said.

He stressed: “I know how it feels like not to have school shoes, proper uniform and being expelled from school for non- payment of fees. I still remember vividly that at one time in high school, I used to wear torn shoes and put card boxes as sole of my pair to protect my feet from soil”.

Mahlala explains that condition forced him to continuously buy pairs of shoes for learners in Quthing. In 2019, he donated shoes to 30 schools in the district.

He said he also deeply care for families of those learners and donate food for their families to ensure that “they do not go to school on empty stomachs.”

On the other hand, district administrator for Quthing, ‘Mapaseka Khesa, told this publication that the district is experiencing serious challenges of parents who leave their children and go to Ceres Farms in Western Cape, South Africa, for greener pastures.

“Poverty remains a challenge in Quthing but the biggest challenge is child negligence. Many parents leave their children alone or with grandparents. When they abandon them, they do not even send money to maintain them or at least help grandparents to pay for fees.

“Children abandoned by their parents and left in the care of grandparents do not behave like children who grow up under the care of both parents. The children tend to misbehave and girls end up falling pregnant.

“I believe these challenges are some of the reasons why Quthing always comes last when external classes’ examinations results are released,” Khesa said.

She said the district, unlike the rest, has a lot of porous borders which enable locals to illegally cross South Africa for greener pastures.

Quthing lies on the border with South Africa’ s Eastern Cape Province. A number of Basotho nationals illegally cross the borders to that country.

She believed that a large number of some South Africans living in that province might originate from the district.

Khesa revealed her office was holding talks with the ministry of education to conduct a study on the condition of education system in her district.

She expected all concerned ministries in the field of education must take part in the study.

For quite some time, Quthing district has not fared well in the performance of its learners at schools, both in secondary and high school levels.

In 2019, one local news outlet has previously highlighted that the absence of parents from homes was negatively affecting learning in class, resulting in children performing below required standards.

“Children grow up without care and monitoring. This makes it difficult for them to study in a healthy environment of parents at home. They do not have anyone taking care of them. They do not have people providing for their school needs on time,” it reported.