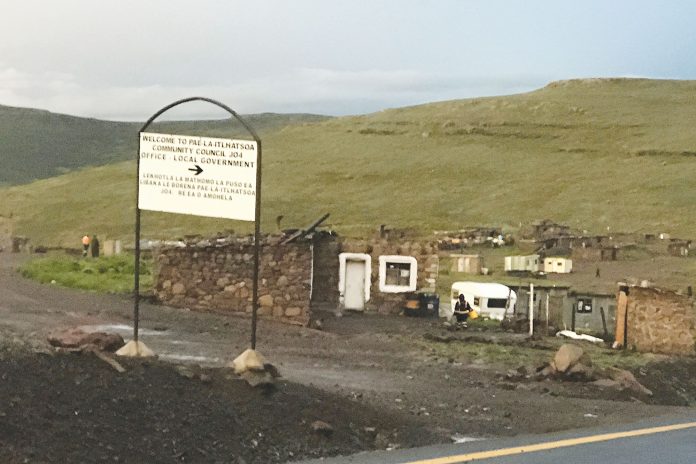 Residents of Phuthalichaba, an informal settlement perched one kilometre from the Letšeng Diamond Mine in Mokhotlong, are perpetually desperate for the mine to give them jobs, and live in undying hope that one day they might get lucky.

With a population of approximately 500 people, Phuthalichaba is one of the villages that are dotted around the Letśeng Diamond mine in the Pae-la-itlhatsoa area. The only difference is that it was set up by ‘migrants’ from different districts of Lesotho, who were drawn to the area by the ever-elusive prospects of finding jobs on the mine.

They have no access to basic services like water taps, electricity, schools and clinics; they rely on the mine’s health facility and the water it delivers by tanks on a weekly basis.

They subsist on seasonal jobs at the mine, performing tasks like offloading and cleaning, and they believe they deserve a better deal in the form of permanent jobs. They insist Letšeng and other mines like Liqhobong and Kao owe them an explanation regarding the classification of jobs they offer.

The settlement is their home away from home, where they reside temporarily while looking for jobs at the mines. Some have spent their entire lives there, patiently waiting for their turn to score a job, albeit a temporary one, at any of the different companies contracted by Letšeng.

“Most of us here come from different villages in Mokhotlong; we have come to look for jobs in the mines so that we can provide for our families. We come here, stay for a month or two, register our names with our councilor and go back home to continue working on the fields and looking after our families and livestock.

“Like many of us, I have not been lucky to find a permanent job in the mines for the 20 years I have been residing in this village. I only get temporary jobs after a year or two, as the list of people waiting in line for jobs is very long,” says the 87-year old, Khethisa Tśoeu Letsoepa who hails from Ha Moeketsane in the Leribe district.

“I have now resorted to sifting through the mining rubble and, when I get lucky enough to find a tiny chip of diamond I sell it. I then use the money to buy food for my family back home and to sustain me during my sojourn here,” he told theReporter.

Letsoepa further said that the money they get from selling a melee diamond is not that much, as it only fetches about M2000 which only covers food and rent.

Understandably most of these residents live in rented houses and they have to pay rent monthly to the real owners. To lessen the brunt of rent money, some huddle in groups of up to five in a single rondavel.

Another resident, ‘Maboitumelo Moteete from Mapholaneng in Mokhotlong, has been queuing up for a job at Letšeng since 2014 and only got lucky in 2015 when she got six-month job at the mine; since then she has been scoring these temporary jobs more regularly.

“We don’t need temporary jobs; we need permanent jobs because as it is the money is too little to cater for my needs and those of my kids back home. Women usually get cleaning jobs while men sometimes do get one-day temporary jobs where they will be called to unload a truck, for example.

“I usually work for a cleaning company called Tsebo where I get paid M12.65 per hour, which amounts to M2000 a month.

“Life is very difficult because we stay here waiting for a truck to come from the mine to come and hire us, and sometimes the truck doesn’t come for months. We do not have enough food to eat, no fuel, no firewood and no means of heating our rooms as the place is very cold,” she said. Temperature at Letšeng drop as low as -10°C.

Moteetee also expressed hope that Letšeng will include their village when it develops other communities around the mine; she singled out electricity as one of their cardinal requirements which they need for their living conditions to improve.

For his part, Letšeng public relations officer, Lebohang Chefa, noted that the case of Phuthalichaba village is a very tricky and challenging one, as many of those people come to live there for a short period of time except those who have built houses and are renting them.

“Some people do get permanent jobs from the mine but the challenge that persists is that most of those people who reside in that village do not have skills that could help them get permanently hired.

“Unlike in the past where mines used a lot of manpower, nowadays mines use a lot of machinery which has replaced quite a sizeable amount of human resources, and as for people who are unskilled, it is very hard for them to find jobs in the mine because those machines need qualified people or people with experience.

“However, that does not mean people who are unskilled do not get permanent jobs; they still do because they get employment through experience from those companies contracted under Letšeng diamond mine,” Chefa explained.

Another challenge he further said, is that the village was an informal settlement and therefore it was hard to know which people are responsible for developments that could be done there.

“It is only recently when some of the villagers decided that they would like to have a chief and a councillor who will be responsible not only for the developments but also for compiling and managing lists of people queuing up for jobs at the mines.

“I believe now that the place is no longer an informal settlement, there will be more developments done there, even if those people do not reside there permanently.”

Meanwhile, the Mokhotlong District Administrator, Serame Linake said the place has been in existence since the 1970s after the first miner De Beers Group started mining at Letšeng in 1967.

He added that Phuthalichaba was initially not meant for permanent occupancy, but was a place where people who worked in the mine would reside.

In 2018, MNN Centre for Investigative journalism reported that Basotho miners employed by one of the companies contracted at Letšeng Mine, Minopex Lesotho, accused their employer of unfair labour practices, alleging the company hired them on short-term contracts to avoid paying higher wages.

The investigation found that the miners were employed on short-term contracts for prolonged periods, sometimes earned as little as M1 533.49 per month depending on the total number of hours worked in that particular month.