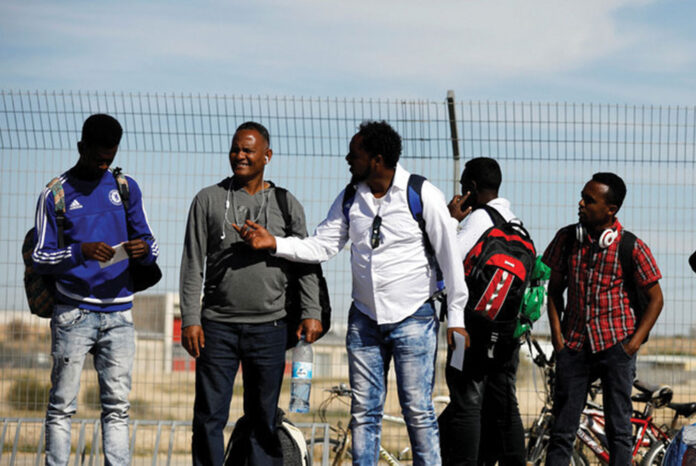 According to the Southern African Institute of International Affairs, Lesotho receives the least number of migrants in the SADC region with the country hosting only 6 572 immigrants compared to neighbouring South Africa which receives 3 142 511 of migrants every year.

Reports have indicated that South Africa is one SADC country which received more migrants because of the booming economy. Furthermore, Lesotho with its high unemployment rate has since seen people leaving the country for South Africa; most are currently in the informal sector while many of the women going to South Africa work as domestic workers.

Unlike in the past when many Basotho families had more than one male family member working on the South African mines, the situation has changed in recent years as the gold mines have also shrunken, accommodating only a few men to work in the mines.

On the other hand, South Africa has also been struggling with high unemployment rates, prompting the youth of that country to express their frustration by, among others, targeting and brutally attacking expatriates in their midst.

The Africa Migration Report, which was released recently, tells the story of African migration from the perspective of Africa, and demonstrates the continent’s ardent desire to take control of managing this phenomenon in a manner that maximizes its benefits for the citizens of the continent, while also addressing the negative impacts that continued, uncontrolled migration imply for African countries and migrants.

theReporter had a chat with one of the migrants living in Lesotho, who offered an interesting, thought provoking and eye-opening perspective on migration.

“My name is France Nada*. I am from a small island country which is a member of the Southern African Development Community (SADC) – Mauritius. I first came to Lesotho when I was a year old with my parents because they were working here.

“I grew up here, schooled here for my entire primary and high school. However, when I finished high school my father retired and decided to go back home and since I was still under their care I had to also go back home.

“After finishing my tertiary education six years later, I decided to come back to Lesotho. I couldn’t blend in with Mauritius because I did not know much about the lifestyle back there, I did not have friends there, I also did not know the languages spoken there,” Nada explains how he decided to permanently move to Lesotho.

However, it has not been all smooth sailing for Nada. He laments that acquiring documentation like a permanent residence permit or even naturalisation has proven to be quite a challenge. The explanation he gets from home affairs officials is that he came into the country as a minor, went back to his native country, and came back to Lesotho again as an adult, meaning he did not spend his entire life in Lesotho to make him eligible to be regarded as a citizen of the country. This despite the fact that he had lived in Lesotho for more than 15 years, albeit as a minor.

Nada is now married a Mosotho wife with whom they are blessed with a daughter (now three years old); they have been married for five years. He has no plans of going back to Mauritius because his life is for all intents and purposes, in Lesotho and he has also set up a successful engineering business which employs eight Basotho men.

“Lesotho is now my home and, with my business, I am contributing to the economy of the country and helping it grow so that it becomes economically stable and a better place for the future of our kids.

“Obtaining proper documentation in Lesotho will be very vital for me, but since the country’s citizenship laws have changed, I am very patient and optimistic that I will one day have documents, even if its citizenship through marriage, it will still be good. Unlike other people who acquire citizenship through corrupt means, I am willing to go the legal route, even if it means waiting for 10 more years. I am prepared to wait. I am not going anywhere.

“Lesotho is a great country with loads of potential and opportunities. It is very competitive for my business, and I don’t think I would I would get the same reception and welcome I get from the people here if I went to Mauritius because, even though the market is huge back there, there are so many businesses of this kind.”

Nada further hopes that marrying a Mosotho wife has given them the opportunity to bring the two different backgrounds and cultures together so that in the end they have one happy family.

“My wife is very keen on relocating to Mauritius and she is the one who visits my family a lot family while I stay behind to take care of things here in Lesotho. I have actually realised that migration is actually a good thing to do because as Africans we are one nation only separated by artificial borders.

“As much as borders also separate us from exploring other nations, I think it is high time that SADC countries realised that some people have immigrated because they want to better their lives and the lives of people around them while at the same time helping the country overcome the high unemployment rate.”

Basotho in SA to get help

Lesotho to receive M800m from IMF to address Covid-19

By Kefiloe Kajane The Maseru City Council (MCC) says it has no idea when the Mpilo Boulevard Intersections and...