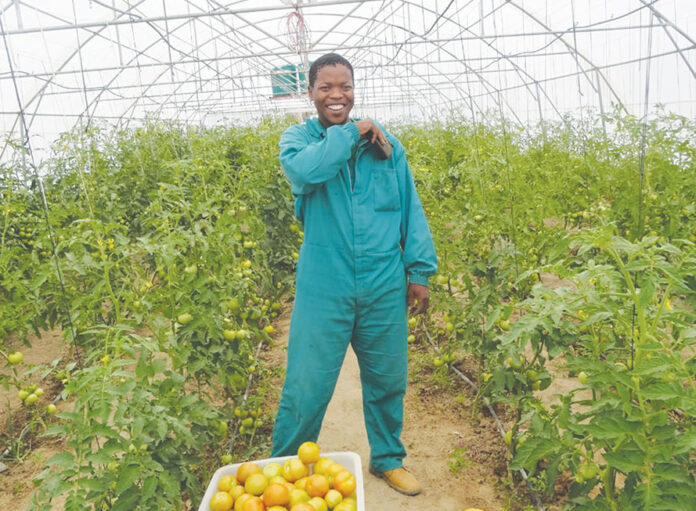 In Lesotho the district that is renowned for farming is Leribe as it has many farmers, but one of the better known commercial farmers of Mafeteng, Khahliso Seseli wants to buck that trend and put his district on the map too.

Seseli is a National University of Lesotho graduate with a degree in Crop Science and Agriculture and owner of Leloaleng Farming which specialises in vegetable production. He said growing up, he did not like farming but later on he decided to study it and now it is his full time job.

Speaking to theReporter this week, Seseli said he started his business with his wife in 2015 in his backyard plots but the business was not booming because of climate change.

“It was only after we received funding in the form of a green house, shade net and borehole tap that things started looking up. Water was also our main challenge but after that funding really our business eventually took off.

“We started producing in large quantities and people started coming in to buy, and we could not be happier. Being in the farming industry is challenging though, as more and more people are slowly getting into farming; this means competition is very high. We try to be different by producing quality products and many of our clients leave very satisfied,” he said.

He indicated that they are currently just feeding the district of Mafeteng, but he is hoping that if their business continues to thrive they will be in a position to feed the whole country and venture into bigger markets.

Seseli said, courtesy of his business, he has been able to escape the unemployment that has pervaded young people in Lesotho; he has also been able to take his children to school.

“I hope more people could realise that success is everywhere, not just from being employed. It is rewarding to have your own thing that provides for your family and also gives others opportunities.”

He concluded by revealing that he will soon be adding new products to his farming, as part of expanding his business.

Crocheting made with elegance