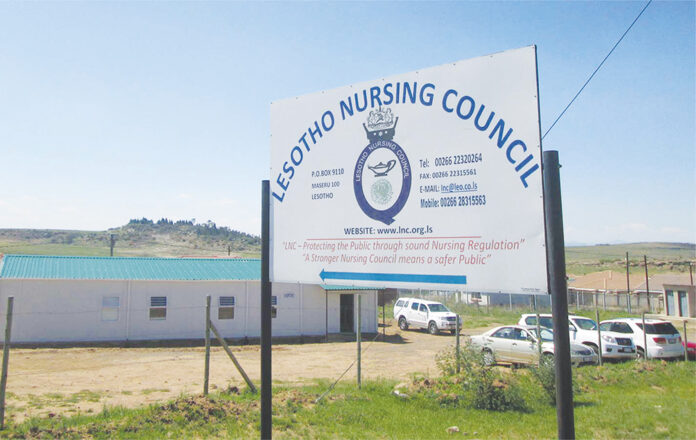 A nurse graduate, Sechaba Hassan Saidi, who is entangled in allegations of forgery of academic certificate is now said to be a subject of a complaint and a probe.

This after the Lesotho Nursing Council (LNC) received a complaint alleging misconduct by the Maluti Adventist Nursing College former student.

The complaint, according to reliable sources which talked on condition of anonymity, relates to the allegations that Saidi falsified his academic results when he applied for admission at the nursing college.

The probe has found out that the following year he enrolled at the Maluti Adventist Nursing College where he began studies in General Nursing and later on Midwifery until 2017 when he completed his studies.

The weekly found out that Saidi’s high school leaving certificate grades allegedly did not meet the required standards for admission at the nursing college. He then submitted falsified academic record different from that obtainable at the Examinations Council of Lesotho (ECoL).

The GCE is regarded to be far below the required entry point at the nursing college run by the Seventh Day Adventist Mission.

The publication sought to find out if there was any complaint laid against Saidi and the nature of such a complaint. The complaint was lodged slightly more than two months ago.

The council said there were three steps followed when dealing with the complaint. Firstly, LNC receives the complaint and secondly, starts conducting an investigation. It is followed by a hearing which concludes with a judgment being passed.

“The first three steps are confidential and an information relating to them can’t be shared. It’s only after the verdict that the LNC office can be able to share the outcome of the verdict; the reason being some complaints appear to be not prosecutable after investigation and its only wise for our office to share information after judgment,” the LNC wrote in its reply.

It said that the timeline that the office expects to deal with any complaint is three months.

“It can be prolonged depending on the number of complaints to be investigated or heard, which were reported before such a complaint was received,” the LNC office continued.

The council is a statutory regulatory body established by the Act of Parliament and continues to exist in terms of the Nurses and Midwives Act of 1998.

It is responsible for the regulation of the Nursing Education and Practice in Lesotho through setting standards of nursing education and training as well as standards of practice and ensures compliance of the set standards.

It also makes rules and regulations for nurses, midwives and nursing assistants and ensures compliance. Again, the LNC is also responsible for the registration of pupils nurses, student nurses and student midwives, nurses, nurse midwives and expatriate nurses.

An ECoL internal source in July reliably told theReporter that Saidi’s results slip obtainable at the nursing school were different from those in possession of ECoL. The source said ECoL had received the copy of such results from the college administration and “are indeed fraudulent.”

The source openly revealed: “The documents in the file at college are fraudulent as they do not match what ECoL has in its records. ECoL is likely to open a fraud/forgery case with the police. How could that have happened? “the source wondered.

At the time, when contacted for comment, EcOL chief executive, Mokhitli Khoabane, said he was not aware of the allegations around Saidi’s high school academic record slip. He advised he writer to ask the nursing college to send him the record received when Saidi applied for admission at the institution.

He warned: “I hope you understand I am also required by law to guard against qualifications fraud, but I should not discriminate and perpetuate frictions which may lead to misuse of personal information.”

Last week, ECoL legal manager Motebang Mabathoana could only briefly say ECoL has written a report on its findings detailing the discoveries and that the docket has been opened with the police.

The Lesotho Mounted Police Service public relations officer, Senior Superintendent Mpiti Mopeli, is on record confirming that police were investigating the matter as it has been brought to their attention.

Without detailing what specific action her office would take, Lesenya said if indeed the result slip submitted for admission at the college “is in question, it would still be critical for us to get those details and it will assist to make future determination.”

It is understood that Saidi is an employee of EGPAF.

And Khoabane replied that he was not sure about whether “I have to give you verification (on result slip) for document you haven’t submitted.” He explained that the issue in contention was relating to the academic result slip that was submitted to the nursing college when Saidi applied for enrolment.

Clearly, he suspected that Saidi must have used an authentic copy of the academic high school result when he applied for employ at EGPAF.

The developments are a thread from an investigative story written about Saidi’s alleged submission of forged certificates ferried to the nursing college.

In the report, the college acting director, Lillo Kuape, was not aware of the stinging allegations, saying Saidi, who graduated in 2017, was admitted at the school long before most staffers took office.

He said the college had adopted a policy for prospective students to meet certain requirements before admission into their fold. That, he suggested, was to ascertain the suitability of the students.

According to the nursing college’s quality assurance officer, Paul Chakafa, the facility runs two programmes of General Nursing and Midwifery. Both offer diplomas to successful students upon completion of studies.

It is a requirement, he urged, that prospective students should have passed the Lesotho General Certificate of Secondary Education (LGCSE), a certificate adopted from the formerly known Cambridge Overseas School Certificate.

Such students, according to Chakafa, should have passed at least six subjects. Four of them should be passed in credits as a minimum. They include either Physics, Chemistry or Biology while in English and Mathematics students should at least have attained a ‘D’ or rated better in both subjects.

But the weekly has uncovered that Saidi did not meet these necessary requirements based on his original result record when he completed high school studies.

Asked yesterday whether he was aware of the lodged complaint, Saidi said he was not aware of it as nobody has told him anything.